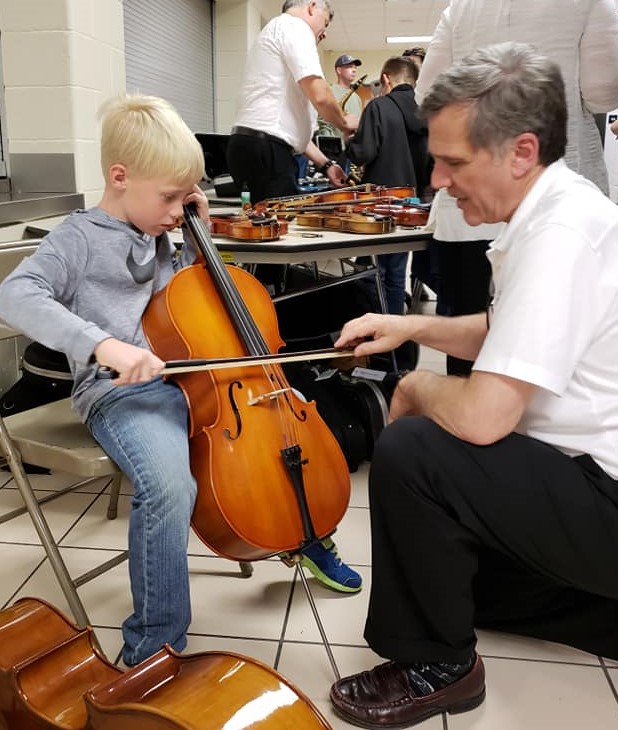 A momentary event in a school classroom in Elmhurst, Illinois when I was nine years old had a profound effect on the rest of my life. It was time to pick an instrument to play in the school band or orchestra. I didn’t care for my older brother’s cornet. I couldn’t get the clarinet to even squeak. The violin squeaked too much. The music teacher said they needed bass instruments. OK, I’ll try the cello. I sat behind the instrument and, with a little help, pulled the bow across the strings. That was it. “I like that.”

When I was in junior high my parents spent a rather large amount of money, for the time, on a vintage instrument for me. I joined the Elmhurst Symphony, a community orchestra, at about 15. In high school I played string quartets with friends who went on to attend prestigious music schools. Although that did not end up being my path, I continued to play in orchestras and quartets into adulthood.

Years later I was beginning to think I’d have to put the orchestra aside to beef up my social life, when an extraordinarily beautiful woman named Pam appeared in the first violin section. Friends from the orchestra played at our wedding. The old instrument my parents bought me had soared in value. A few years later we moved to the Milwaukee area and found the Menomonee Falls Symphony as our musical home. I was soon on the board of directors there. That happens when you’re a lawyer.

When we moved to Lake Geneva in 2001 we found a tiny, fledgling group called the Lake Geneva Community Orchestra. It wasn’t the level of musicianship I was used to, but it was my new hometown orchestra, and the musicians and the young conductor were friendly. It didn’t take them long to get me on the board of directors either. The rest of that story is history. Living in Lake Geneva also meant we were close to our beloved sailboat.

Our first son played violin from age three to eight, when he announced he was going to switch to the cello. Honestly, it was his own choice. That led to years of driving to Milwaukee or Elgin for youth orchestra rehearsals, not to mention Green Bay and Door County for summer music camps. Our second son dutifully played viola into high school, but he more enjoyed being a stagehand and light operator at LGSO concerts, which, bless his heart, he never missed.

When my high school cellist had clearly gotten better than I was—much better—I realized I was only a custodian. It was obvious he should play the beautiful cello that his grandparents bought him 25 years before he was born. I like my new cello just fine. It’s forgiving.

Today I’m still a lawyer, still playing in a community orchestra, still on the board of directors, and still sailing. My sons, to my amazement, are both serving their country in the U.S. Navy. I’ve had a modicum of success recently teaching cello to a handful of students. That talent must come with age. The achievements of the LGSO have exceeded my wildest dreams. I’ve performed music I never thought I would, at an astoundingly high level, especially Beethoven’s Ninth and the Rite of Spring. It’s way worth all the practice.